Shockingly and somewhat blindingly, Sebastian will be turning two this weekend (August 3.) Every time I say that to a client, they give me the same look:

And it really has been a blur.

But at two years of age, Sebastian is full of laughter, smiles, tantrums, and trouble.

The last two bear the most mention.

My running joke with Marissa is: If he’s throwing some unholy tantrum, that’s YOUR child. But if he’s not listening and he’s getting into trouble, that’s MY child.

By the same token, she and I were sitting on the couch watching him play in the living room. He was getting into something he shouldn’t have been and Marissa kept saying to him: “Sebastian, no. Sebastian, no, no!” Of course, he wasn’t listening (MY child.) Marissa leaned over to me and whispered: “Our child is baaaad.” To which I replied: “Yes, he sure is.”

His first swear word? Yeah, that was my fault. He repeated something I said a few months ago so I get the parenting fail for that one.

It’s never a dull moment with the Leenaarts family. Certainly not with a two year old Biscuit running around the house like a heathen.

He loves his TV shows, his books, his toys, he loves our boxer Dempsey, he absolutely adores his mother, his Nana (he says Nina), his Booma (Marissa’s grandmother) and his Mula (he says Muhna.)

Like his mother, he loves being outdoors and she has taken every opportunity to get him to parks and every place where he can run his heart out (or run to exhaustion so he’ll take a nap!)

But the greatest part, in my opinion, is how much he loves his big brother.

As most of my readers know, Jackson is from my first marriage and he spends most of his time with his mother who has undoubtedly given the same undying love and affection to him as Marissa has Sebastian.

But when Jackson is with us, Sebastian only ever wants to be by his side. Jackson likes to retreat to my office where he can get on the computer and watch the shows he likes. Sebastian, ever the loving and attentive little brother, wants desperately for Jackson to play with him. He’ll stand at the bottom of the staircase and plead “Jackson, come down here!”

And of course, the bittersweet side of this is that due to Jackson’s challenges with autism and Sebastian’s lack of understanding at his age, we haven’t been able to help him understand that Jackson may not always want to play the way Sebastian wants to play.

Nevertheless, when the boys are together, it’s one of my proudest parenting moments to witness. Both boys (at least now) are happy, loving, and, when prompted, can have fun together.

And there are some significant differences parenting a neuro-typical child versus a child with special needs. Where Jackson was (and is) at more of a disadvantage to say what’s on his mind, Sebastian is definitely more vocal, more opinionated and perhaps a bit more energetic than Jax was at the same age.

Which, in many ways, makes it feel like I’m having to learn how to parent from scratch. The boys are vastly different and there are so many things that I didn’t experience with Jackson at the same age.

Sebastian, like his brother, can a light up a room with his smile. He has an infectious laugh and he loves being around other kids. I think he just loves interacting with others (most of the time.)

To my baby boy, Mama and “Dada” love you. We wish you the happiest of birthdays. Thank you for two years of love, laughter, some terrible nights of sleep and for giving your mother and I plenty of reason to not let you out of our sight. 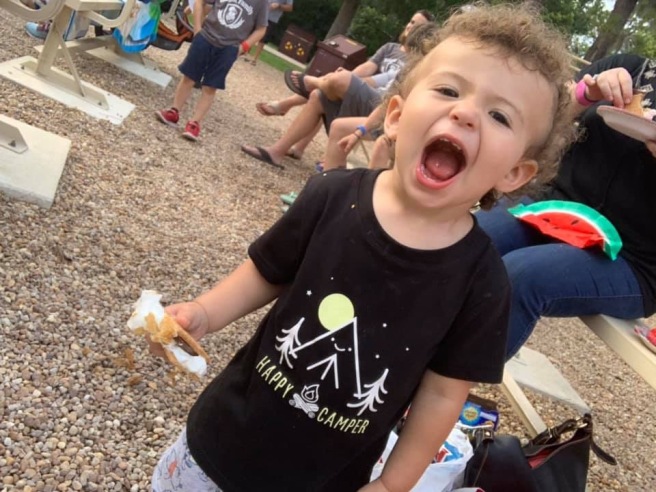