I don’t mince any words about always being a smaller framed guy. By most people’s estimation, I would still at 43 years of age qualify as underweight.

But I feel good and, for the most part, I move well and I’m pretty happy with that.

When I was in my 20’s, knee deep in drugs, I weighed about 10 pounds less than I do now. And even though I was thinner (which might be hard for some to believe), I wore much larger clothing.

Part of that was a sign of the times.

You see, in my 20’s, part of what spearheaded my drug addiction was the local rave scene. If anyone remembers what clothing was like back in the late 90’s, it was…baggy.

I had my pairs of JNCO jeans that had pant openings nearly as wide as my waist. I wore shirts that said “Small” but they damn near looked like curtains on me. There was no way you were going to get me to wear fitted clothing back then.

It was my hope and desire that by wearing less fitted, baggier clothing that I would appear larger in frame than what I actually was.

I’d like you to think about that for a moment.

Over the years of working with both male and female clients, I’ve seen and continue to see a certain trend.

Often, when people don’t feel good about their appearance, they wear baggier clothing so that the “details” of their physique are not as apparent.

The problem, that I think a lot of people miss, is that wearing less fitted clothing CAN make you look larger than you are.

And I understand part of the reasoning, a less confident person doesn’t feel like wearing clothes that accentuate their frame.

I know that among many of the things I had to work on back then, it was a degree of self-confidence. And as I’ve gotten older (and hopefully slightly wiser), I also found that when I bought clothes that made me feel good, not hidden, I felt exponentially better about myself.

In this day and age, we’re presented with several different movements. One of which  proclaims “Health At Every Size” and one that promotes overall body acceptance. I believe both have merit even if I don’t agree with every nuance of those movements.

But from what I see at RevFit, a more confident person is a more capable person, a more willing person, and a more driven person. Sure, these things can be taken to extremes like anything in health and wellness.

I watch what happens as my clients transition from less confident beginners to seasoned veterans and there are both psychological and physical changes that take place.

They’re stronger, more focused, sometimes more ambitious and they have a renewed sense of self-awareness that I believe comes from a foundation of saying: This is my body. It’s both flawed and beautiful. And every day, I work harder to improve it.

When this foundation is established, I see a welcome change in wardrobe. Clothing now “fits” and bodies become embraced by this psychological shift.

This doesn’t mean you need to rush out and raid the Lululemon store. Those clothes are expensive and not for every budget. But it does mean you should look for things that make you feel comfortable, allow for good movement, and should probably include colors that naturally flatter you so that when you look in the mirror you can say: “I’m ready.”

You don’t have to be thin to be happy. Thinness does not equate to happiness.

But I believe that if you want self-improvement, start with a vision of yourself: flawed but beautiful (Fellas: if you don’t want to use the term beautiful, try handsome.) And as I’ve heard the saying go: Dress for the job you want, not the job you’ve got. Maybe there’s something to that.

The woman you see below is our very own Pam. She’s down 40lbs which is a greater loss than the goal she came to us with. True to the inspiration of this post, Pam’s confidence in herself changed as she has evolved with us. Her wardrobe changed not just in size but in style. She carries herself differently. She moves differently. She is not the woman she was when she started. And we love what she has become. 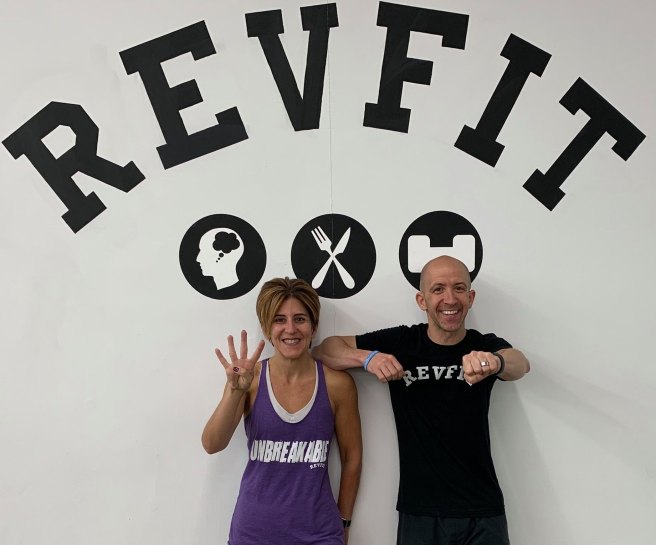 2 thoughts on “Rock The Body You’ve Got”