In the spring of last year, I wrote an article about my client, Hugh (a.k.a Mr. Grit.) For more background than what you’ll read below, I would encourage you to read that article as well.

As we say goodbye to 2018, I wanted to highlight Hugh once again. If you’ve been following me on social media, you may have been seeing the steady progress he’s been making with his traplift. Rather than tell a similar story as before (albeit evolved), I went straight to the source this time and asked Hugh more pointed questions to get a better understanding of how he has accomplished what he’s done so far.

JASON: Hugh, even though I’ve written an article previously about you, a lot has happened with your training since then. For frame of reference, can you state your age and what was going on with your health prior to you starting here?

HUGH: I’m 76 years old.  I’ll be 77 come June of 2019.   Over the last few years, I had two strokes.  The last stroke was in 2016.  After 2-3 weeks of therapy, I returned to work and working out at home. During my workout, I felt a slight pain towards my left shoulder, so I had it checked at the Cleveland Clinic.  The finding was: I needed a quadruple bypass and aortic valve replacement (a.k.a The Widow Maker.) The surgery was done at the end of March and I was home by early April 2017. After a couple of follow-up visits, I was cleared to do some exercise.  That is when my daughter, Kellie, challenged me to come see you…her treat.

JASON:  After your surgery, I’m certain the rehabilitation process must have been
trying. I can imagine many people in your shoes would have been less inclined to push their needle forward. For someone as driven as you are, what kept you motivated to regain your strength and mobility?

HUGH: I can’t imagine myself not being able to do the things I want to do. I feel there is more that I have and want to do and I will need strength: physical, mental and spiritual to accomplish these goals. To me, there is no Plan B!  You do what you think is best for the condition.  Just like exercise, if I can’t perform a specific exercise, you will suggest another exercise that works the same set of muscles. That is not a Plan B, just a different path to the original goal.

JASON: Something I mentioned in the previous article was how your body, and
specifically your right side, had been the major limiting factor in your ability to make more linear progress where appropriate. I tend to be more forgiving of those things because I know sometimes the body has a mind of it’s own. You were far less forgiving about it and seemed bound and determined to fight through that. How do you think you have benefited from that approach?

HUGH: In establishing a goal, one must take a brutally candid look at themselves and identify what is possible and what things will be an impediment to your success. I knew my right side would be an impediment, so I make that impediment a part of my goals.  For instance, when my right arm starts shaking during a bench press, I tell it to “Stop” and  “Get up there” with my left arm. Or, I’ll do another couple of reps correctly.  That is why I am so focused on technique.  Technique forces me to focus on everything being proper.  The little voice in my head keeps reminding me of my goals.  Everyone has that little voice, you just have to listen to it.  My right side is coming along nicely but to me it’s not completely there yet.  I’ll keep working!

JASON:  As we have seen your traplift increase over time, I remember when your
first goal was just pulling 300 lbs from the floor. Once you had that weight completed, the linear progress was really spectacular. At any point, did you feel like you were hitting your physical limit? If so, what was your thought process to overcome that?

HUGH: I think you and I had a conversation about failure being a goal as it relates to lifting a certain weight.  You mentioned the aggregate weight was just as important as lifting a personal record.  I thought about how what you said made sense and it is true. But I felt that I didn’t know what was doable until that weight conquered me and I was on the floor. So, I told my little voice to stop looking for reasons to fail and pick up the weight!

JASON: We were recently having a progress check-in and were talking about your
sticking points. For those who don’t train here, they may not know that sometimes we will attempt a personal record two weeks in a row to see if it’s in the tank. If there are two missed attempts, I will normally transition a client to lower weight and more reps to get the patterns and confidence back in place. In your case, you were game to keep pushing. Around the 365-370 mark, you were in a place where it seemed the weight
wasn’t going to move. Lo and behold, you got the next personal record. I remember this conversation vividly, as it was just a handful of weeks ago. You said “I want to hit 400 lbs by the end of the year. Do you think that’s possible?” I always like to be conservative with my projections and, knowing where you got stuck, I didn’t see it being a possibility. I recall telling you that I didn’t think it was a realistic goal but perhaps by January you would hit it. This is definitely one case of me happily admitting I was very wrong and you proved that to me! Tell me about your mindset as the number kept scaling closer and closer to that 400 lbs.

HUGH:  I was thinking about hitting 400 lbs from the moment I knew 390 lbs was doable.  After all, getting to 300 lbs was my initial goal. Then, getting past 365-370 was a big deal for me because it said to me “You can do it”.  The whole weight thing above 300 lbs was just incremental so it was a freebie for me. My mindset going to 400 lbs was pretty simple.  I convinced myself that it was only 5 lbs more than the 395 I had lifted the week before. My nephew, Raymond, got word of my working out from my daughter Shannon and said he would donate $10 per pound to St. Jude’s Hospital if I made the lift. Now, St. Jude’s has $4000 more to spend on the children.

JASON:  Right before you hit that big number, I remember another conversation with
you leading up to it. I asked you “Hugh, what’s the plan? After you hit 400, are you going for 405. 410?” Your response: “500.” You didn’t even hesitate! I have to tell you, it’s the rare person who shoots for these ambitious goals and doesn’t flinch as they set their sights. In other words, I consider you an exception and not a rule. Have you always
approached life this way? How has this tactic served you over your life?

HUGH: I have always been fortunate in my life to have great people around me.  My wife, of 51 years, Betty, has always believed in me and supported me.  That is a P.R. beyond belief! Now, I draw strength from my six children. Seeing how they watch each other and care for each other makes me proud. My Mom and Dad were always there to encourage me to try things even when I fail. People in business gave me a chance to go higher in the company when it seemed I didn’t stand a chance to excel. That is something for which I’ll always be grateful. My philosophy is: There is no Plan B. Anything is possible, expect it.

JASON: This article will be released as we are on the cusp of a new year. This is
the time when people reset their goals and attempt new ones. You obviously have no fear of aiming high and reaching high. What advice would you give to others who want to see similar success paths that you have seen since you’ve been here?

HUGH: I would advise the client to have a clear goal of what he/she wishes to accomplish here. Then, share that goal with you so he/she can get a realistic assessment of the time it will take to accomplish that goal and would the client be willing to put in the work to achieve the goal. It helps that you, as the trainer, have made the commitment to measuring their progress, monitoring their effort and mixing up exercises to make it new and fun as well as having those periodic check-ins to discuss their progress. I would advise the client to stay involved in the process of achieving his/her goal and not just falling into the “routine” of  simply exercising. This is a journey to a healthier lifestyle, not just a period of times, once or twice a week.

JASON:  Hugh, I want to thank you again for your candor and honesty. You have
remained an inspiration to many and it has been a sincere honor working with you and learning from you.

HUGH: Thank you for your help. The same goes to your staff, Mike and Luke, as well. 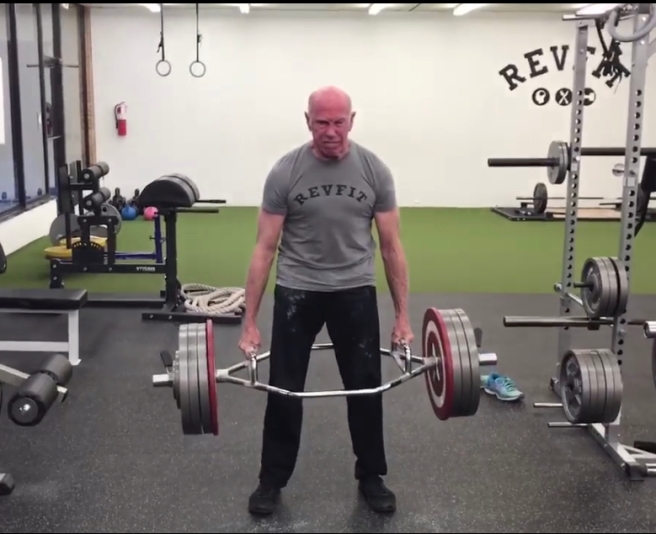 One thought on “There Is No Plan B”