“The title of this post was inspired by the Judybats song of the same name.”

I’ve been certified as a personal trainer for nearly nine years. I’ve been involved in the fitness industry and given fitness advice to people for about seventeen years. Much of that initial advice was given well before I had much of a clue what I was telling people. Having always had a smaller frame and build, there were frequently people at a gym who would ask me what I was eating and how I was training to keep a certain physique. When I realized that I enjoyed fitness but wanted more of a foundation in having an idea what to tell people, I decided to get certified as a personal trainer.

Within weeks of getting certified, I tore my rotator cuff performing an exercise that I was very accustomed to doing, at a weight that was not uncommon for me. Mind you, I didn’t know that I did anything particularly wrong. I felt a pain and did what a lot of people do: I continued to “work through” it. That “work through” caused more damage to the already injured area and it forced me to take a break from the gym, get some physical therapy, rest, and eat more painkillers than I probably needed to.

After about six months, I was able to get back to my workouts again. Not a great way to celebrate being certified! Over the years, I’ve continued to experiment with different workouts and training philosophies in efforts to find a method that worked best to my benefit. I didn’t start lifting weights with any seriousness until my mid-20s so in some ways, I feel like I may have missed some great opportunities to do more for my body.

There really haven’t been any other major issues with injuries until I started to push myself with my traplift last year. I was aiming for 3 times my body weight. For perspective, my weight has hovered between 135-140lbs for the last several years. So, that was leading me to a 405lb personal record that I was gradually scaling up to. Once I got myself past 300lbs, every new record just felt “heavy.” It was a relative term. One day, I was shooting for a personal best of 370lbs for 3 reps. I hit the set, but it was hard. My back was pretty fired up but not really any more or less than on previous record-setting days. However, I made the mistake of bending over and rotating slightly to remove one of the plates from the bar and my back seized up. I have never felt anything like it.

About 20 minutes later, I was having trouble walking. There was a pain that started at my lower back and went into my glutes and leg. I was terrified that I had done something very wrong to myself and fear started to set in, “What if I can’t do my job??”

I have had the luxury of knowing an amazing chiropractor and sports medicine doctor in the area. He got me in immediately and confirmed what I was already feeling: “Your back is really fired up right now and we need to get it calmed down.” He also added, “I know you pulled 370lbs today. I’m not sure I want to see you pull 380lbs.” Point taken. If this was the result of my ego getting the best of me, I wasn’t confident I would be able to perform the lift ever again.

After about a week of hobbling around and babying my back, I was starting to feel normal. No herniated disc or permanent damage. But I started to think about what went wrong during the lift. Did my form go bad? Were my breathing and bracing mechanics out of sync?

So, back to the drawing board I went. I would continue to work on the things that could have gone wrong. Over time, I started to play with the lift again but at a much lower weight. I allowed myself to just get into the movement pattern, work on breathing, bracing and perfecting form. I also gravitated back to the traditional deadlift. For those who don’t know the difference, a traplift is a a deadlift variation where the weight is loaded evenly on each side of the body as opposed to being loaded in front of the body. For many people, the traplift is considered a “safer” alternative for those looking to pull considerable weight off the floor.

Here’s a shot of me at starting position for a traplift, note where the weight is distributed in relation to where my body is. 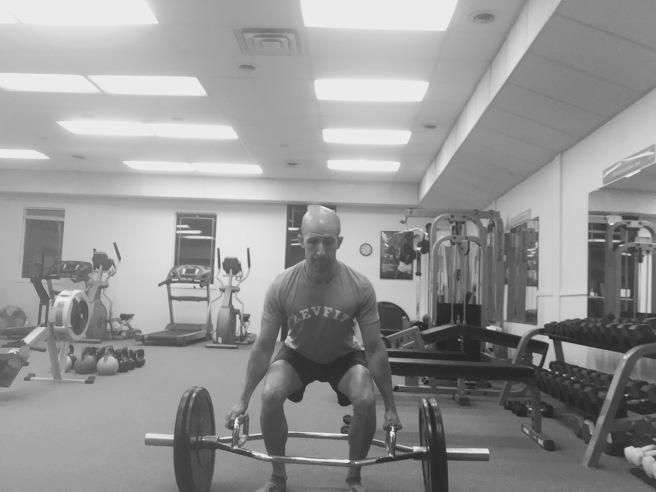 For comparison, here I am at starting position for a traditional deadlift.

A few months ago, I was pulling a deadlift at 180lbs. Mid-way through the set, my back seized and it sent me straight to the floor. This was pain far beyond what I had experienced a year prior and I was moving 50% less weight! So, back to my favorite sports med doc I went. This time, he and I had a far different conversation. Fortunately, still no disc herniation but I was in much greater pain and had so much difficulty walking or sitting for the first three days, I had trouble imagining relief.

This was the point where my doctor, an avid weight-lifter and strength enthusiast himself, said “You may need to consider that you might not be best suited for this lift.” It was another blow to the ego but I knew I had one of two options: 1) Ignore the advice, feed my ego, and risk not only another injury but compromise my ability to do my work OR 2) Find alternative ways to lift so I can still be active and productive.

I love lifting weights. I’m not a big guy and I have no visions of competing in powerlifting meets or anything of the sort. But I love feeling strong. However, I’m not getting younger either. I try to suffer few illusions of looking like anyone on the cover of a fitness magazine.

But I do need to highlight something else as well: lifting weights, exercising, being active in any way bring a risk of injury. That risk is real and the likelihood of me having a lifetime of fitness will carry it’s share of injuries along the way. My best hope is to keep my injury rate as low as possible throughout my life.

What I have noticed after years in this industry is, injuries like these, while horribly unfortunate and a complete inconvenience are not very uncommon with fitness professionals. I network with many of them around the world and at some point, we all have a horror story to share. The difference is, who decides to keep performing the problematic lift and who decides to move on to other options.

I should also mention the fact that with all three of the aforementioned injuries, I was training alone. No spotter, no one to tell me where something may have looked “off” before the lift began. Do you need a spotter or a trainer for everything you do in the gym? No. But if you’re trying to tackle some of the accomplishments I was going for, relative to where you are now, it might help to have another set of eyes on you to make sure everything is moving the right way.

Frequently, I’ll have clients come in who are dealing with one injury or another. Because many of us want to appear tough enough to handle our pains, the typical response is to “work through”that vulnerability. I would encourage you to heed my advice in being extremely cautious and conservative with that tactic.

As I have had to take stock with where I want my training to be and what tools I have at my disposal to get me there, I’ve found it is far more important to work around pain than to work through it. If I could never do another deadlift or traplift again, could I still get strong and do good things with my back-dominant workouts? 110% yes.

The biggest takeaway I want you to have from this post is to realize that working through pain is rarely ever a good idea. Leave your ego at the door and stay conscious of keeping your form appropriate for every lift, heavy or not. If you need a spotter, make sure you have one who knows what to look for when form breaks down. Contrary to the title of this article, which was inspired by a little gem of a song from a fairly unknown 90’s band, pain probably won’t make you beautiful but you can sure learn a lot about your limits if you succumb to it.

Train responsibly, make progress, and be fresh for your workouts. The results will speak for themselves.

3 thoughts on “Pain Makes You Beautiful”